Lightfall: Book 1 - The Girl & The Galdurian
This is my debut graphic novel, which I wrote and illustrated. Released by HarperAlley on September 1, 2020.
New York Times bestselling author Kazu Kibuishi says of Lightfall: “Beautifully drawn. Tim Probert has created a world readers will want to visit.”
Deep in the heart of the planet Irpa stands the Salty Pig’s House of Tonics & Tinctures, home of the wise Pig Wizard and his adopted granddaughter, Bea. As keepers of the Endless Flame, they live a quiet and peaceful life, crafting medicines and potions for the people of their once-prosperous world.
All that changes one day when, while walking through the woods, Bea meets Cad, a member of the Galdurians, an ancient race thought to be long-extinct. Cad believes that if anyone can help him find his missing people, it’s the Pig Wizard.
But when the two arrive home, the Pig Wizard is nowhere to be found—all that’s left is the Jar of Endless Flame and a mysterious note. Fearing for the Pig Wizard’s safety, Bea and Cad set out across Irpa to find him, while danger fights its way out of the shadows and into the light.
Will these two unexpected friends find the beloved Pig Wizard and prevent eternal darkness from blanketing their world? Or has Irpa truly seen its last sunrise?
Kirkus Best Books of 2020
Fall 2020 Indie Next List
Junior Library Guild Selection
American Library Association Best Graphic Novels 2021
Festival Angouleme Official Selection
Quai Des Bulles Award Winner
Prix des Libraires du Québec Winner

It is available wherever books are sold.
IndieBound - Barnes & Noble - Amazon

Lightfall: Book 2 - Shadow of the Bird
Released by HarperAlley on April 26, 2022.
New York Times bestselling author Faith Erin Hicks says of Lightfall: “Gorgeous artwork and a lovable heroine make Lightfall the series I wish I'd had as a kid.”
In the second installment of the award-winning, critically acclaimed Lightfall series, Bea and Cad continue their quest to stop Kest, the mythic bird who stole the sun. Perfect for middle grade fans of Amulet and Avatar the Last Airbender, Lightfall: Shadow of the Bird is another breathtaking journey into the magical world of Irpa, where epic battles and powerful creatures abound.
After a battle that nearly cost them their lives, Bea and Cad awaken in the hidden settlement of the Arsai, mysterious creatures who can glimpse into the future. The Arsai’s vision paints a dire picture for their planet, as the bird Kest Ke Belenus—now awoken from a restless slumber—threatens to destroy all the Lights of Irpa. Desperate for a solution, Bea and Cad seek out the help of a water spirit known as Lorgon, whose ancient wisdom may help them find a way to take down Kest and save Irpa from utter destruction.
But when their time with Lorgon presents more questions than answers, Bea and Cad must decide what’s more important . . . stopping Kest or uncovering the truth.
It is available wherever books are sold.
IndieBound - Barnes & Noble - Amazon

Dungeon Academy: No Humans Allowed!
From New York Times bestselling author Madeleine Roux and acclaimed artist Tim Probert comes an all-new original Dungeons & Dragons middle grade series!
Welcome to Dungeon Academy, where monsters and creatures train for the dark world that awaits just beyond the dungeon walls! But Zellidora “Zelli” Stormclash is a bit—different. She’s the one thing monsters and creatures of the Forgotten Realms fear the most: Zelli is a human!
Knowing she’ll never be accepted, Zelli’s parents disguise her as a minotaur in hopes she’ll blend with the academy’s monstrous surroundings. Zelli does her work, keeps to herself, and becomes “invisible” to everyone.
While in History of Horrible Humans class, Zelli learns of the great human adventurer, Allidora Steelstrike, who oddly resembles her. Could Zelli also be a Steelstrike? Seeking answers to her true lineage, Zelli embarks on a dangerous adventure.
But she won’t be alone. A vegan owlbear, a cowardly kobold, and a shapeshifting mimic will join Zelli on her quest for truth in a world that holds no place for them. And who knows? Perhaps these monstrous misfits may discover some truths of their own . . .
Get ready for humor, heart, magic, and adventure as middle graders and beyond learn to embrace who they are, accept others' differences, and discover that making mistakes is OK—as long as you learn from them.
IndieBound - Barnes & Noble - Amazon
Rip and Red
I illustrated the covers and interior spots for this middle grade series, written by Phil Bildner and published by Macmillan.
Meet Rip and Red and their fifth-grade basketball team, a group of kids who know how to help each other — and find ways to make a difference — in the classroom and on the court. With its energetic and authentic story and artwork, this series featuring racially diverse and neuro-diverse characters is a surefire hit with sports fans and non-athletes alike!
Available from IndieBound, Barnes & Noble Amazon and others. 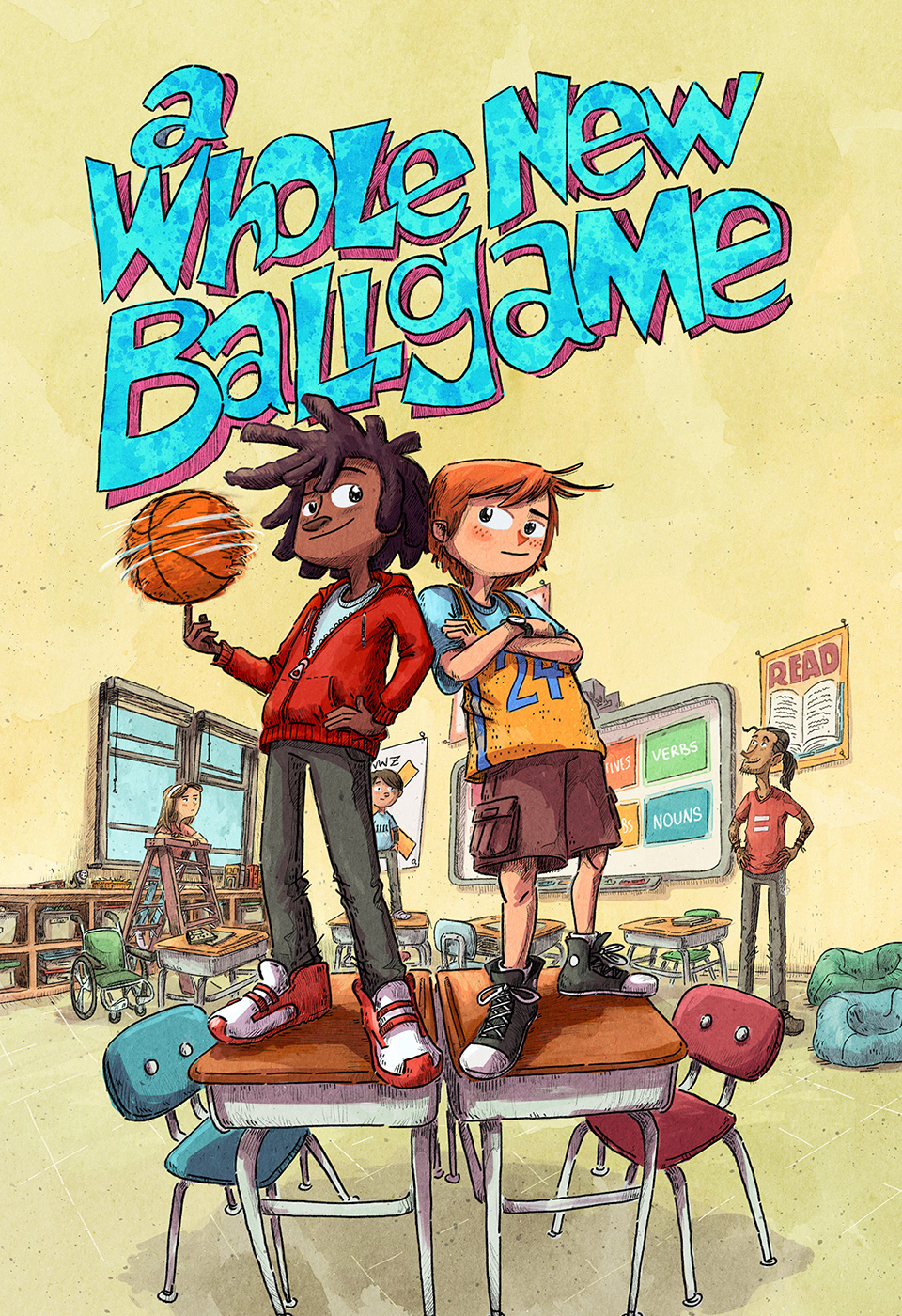 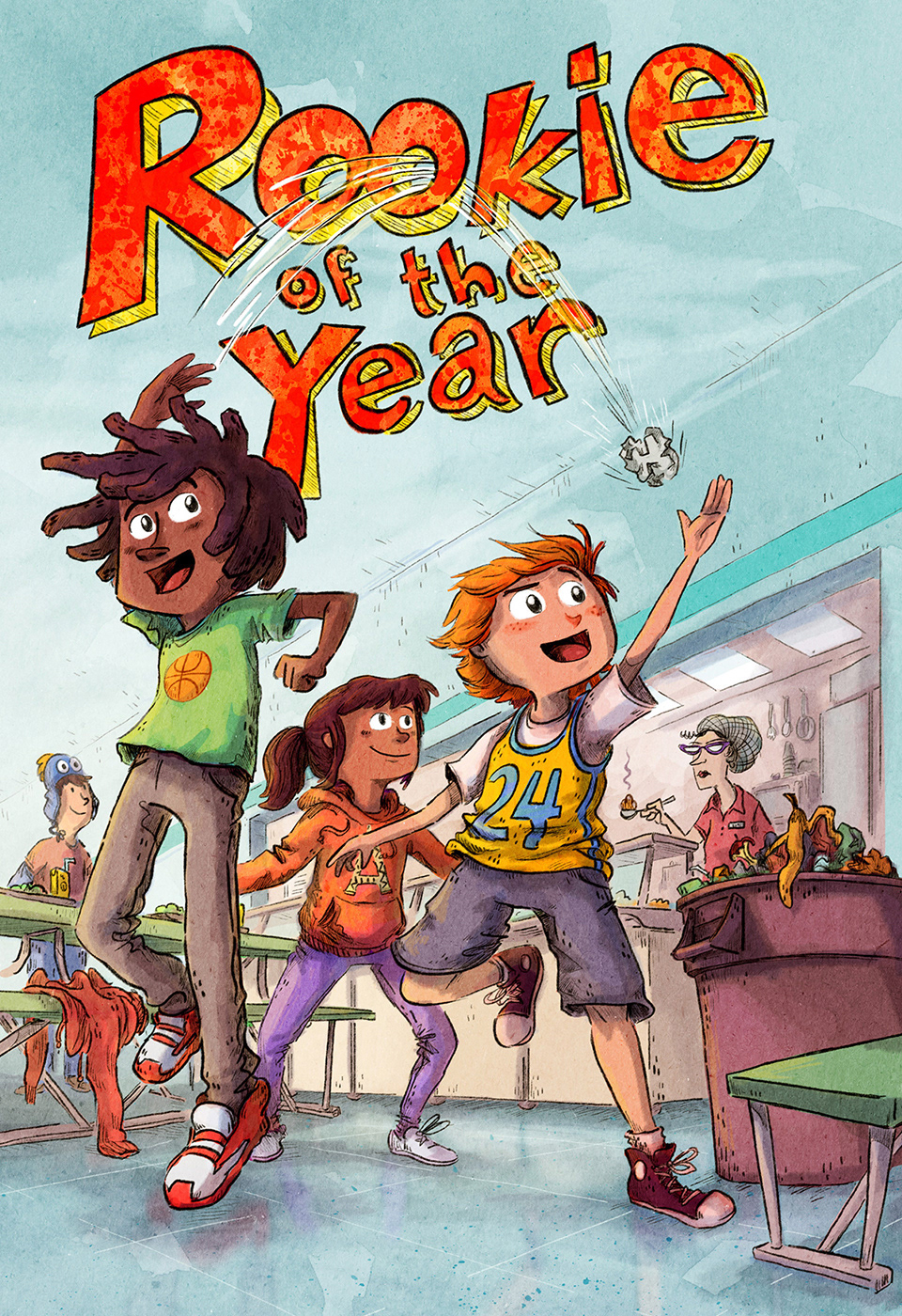 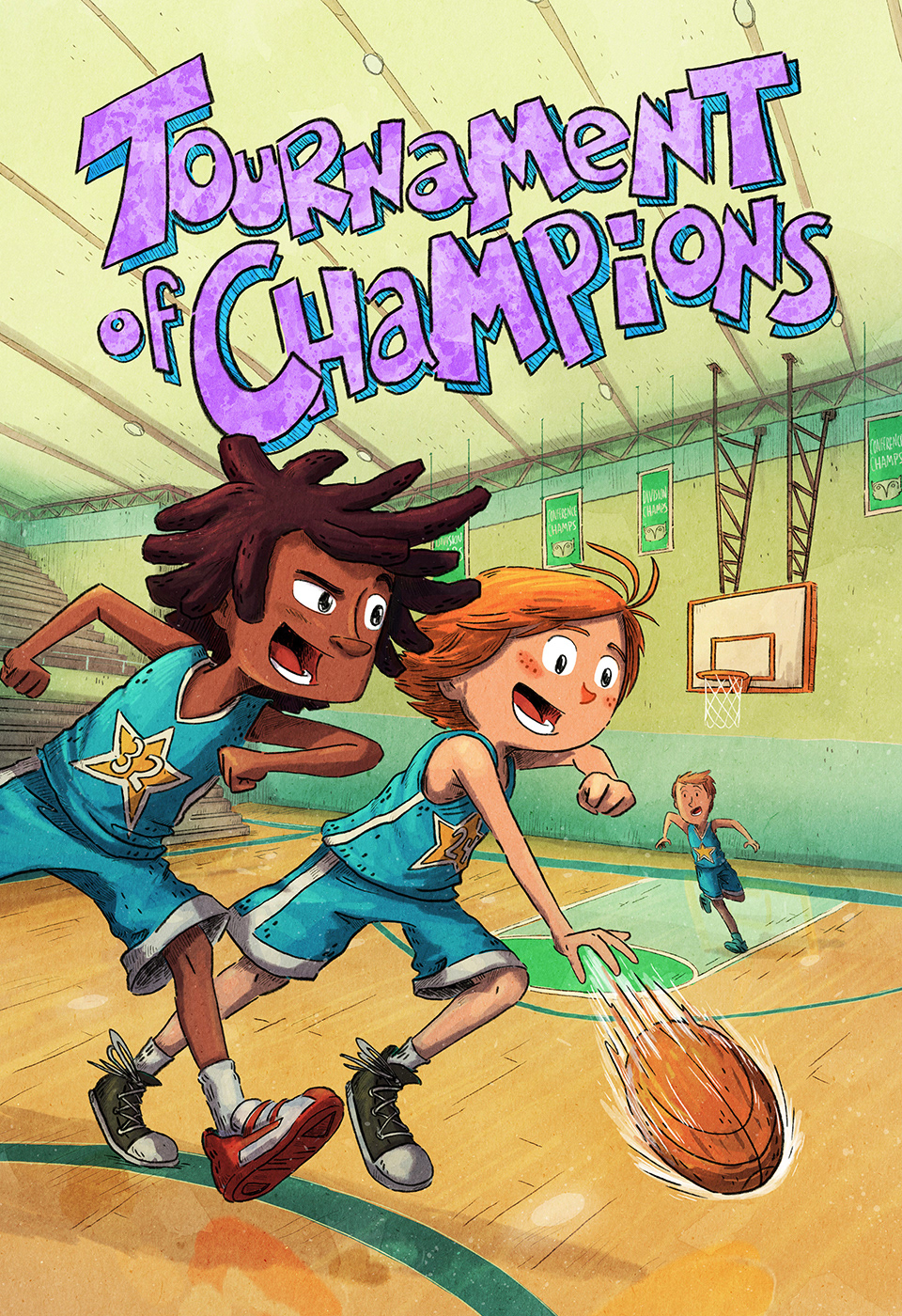 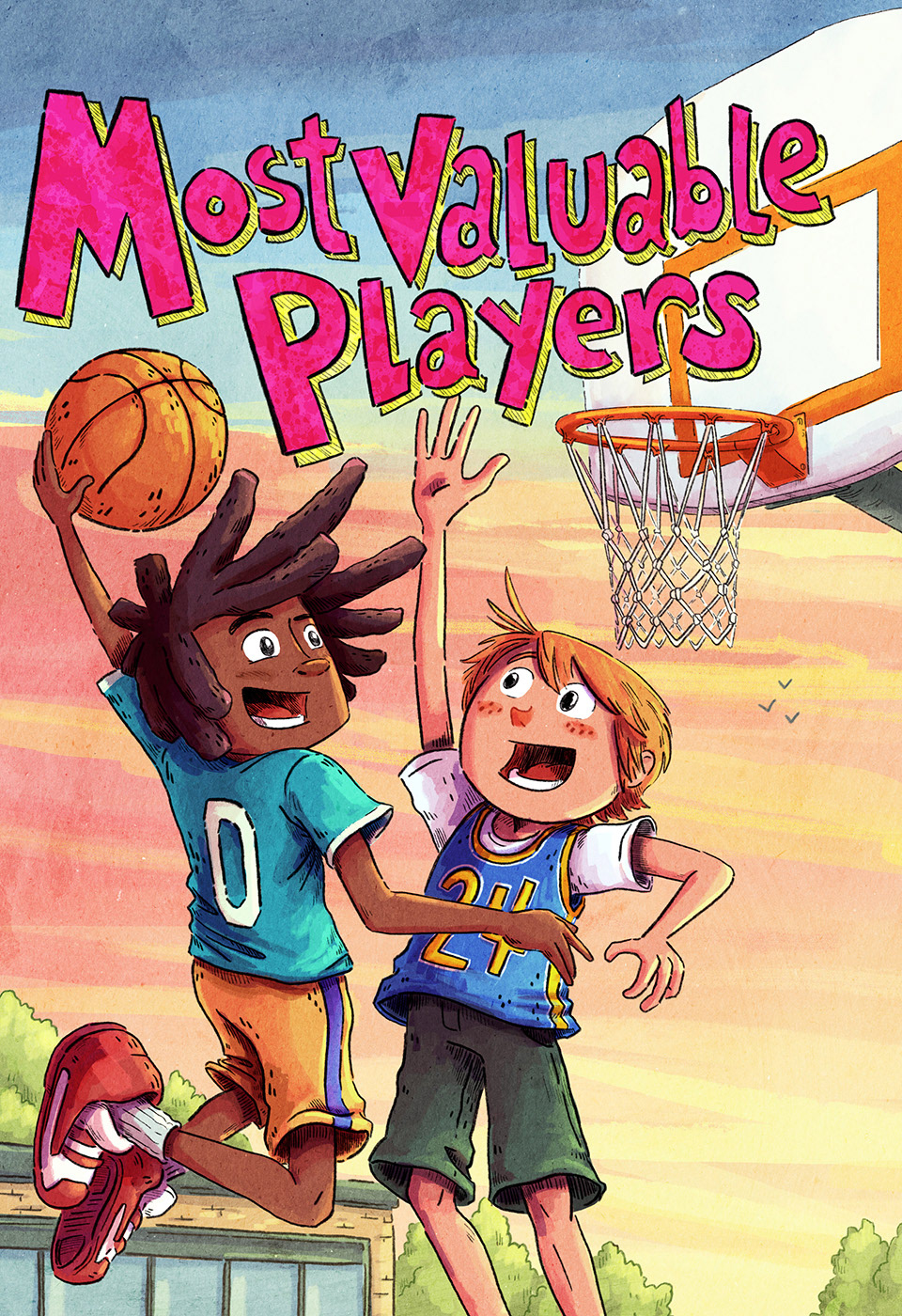 Pickle: The 'Formerly' Anonymous Prank Club of Fountain Point Middle School
The first book I illustrated, Kim Baker's Pickle.
This is the story of THE LEAGUE OF PICKLEMAKERS
Ben: who began it all by sneaking in one night and filling homeroom with ball-pit balls.
Frank: who figured out that an official club, say a pickle-making club, could receive funding from the PTA.
Oliver: Who once convinced half of the class that his real parents had found him and he was going to live in a submarine.
Bean: Who wasn't exactly invited, but her parents own a costume shop, which comes in handy if you want to dress up like a giant squirrel and try to scare people at the zoo.
TOGETHER, they are an unstoppable prank-pulling force, and Fountain Point Middle School will never be the same.
Available from IndieBound, Barnes & Noble,​​​​​​​ Amazon, and others.
↑Back to Top